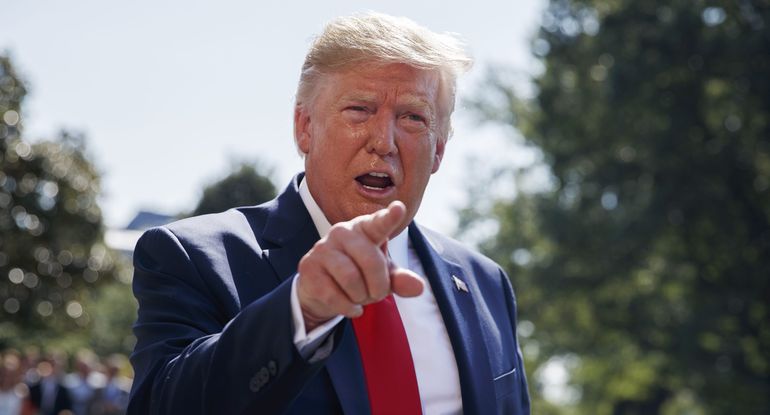 President Donald Trump talks to reporters on the South Lawn of the White House, Friday, Aug. 9, 2019, in Washington, as he prepares to leave Washington for his annual August holiday at his New Jersey golf club. (AP Photo/Evan Vucci)
On Wednesday, the Southern Poverty Law Center (SPLC) released its annual report on "hate groups" for 2019. The report smears conservative and Christian groups as "hate groups" and exaggerates the threats from marginalized racist groups, in what former employees have described as a "highly profitable scam" to bilk donors. Yet the SPLC also goes out of its way to smear President Donald Trump, connecting him with various forms of "hate."


What is the truth behind such attacks? As I document in my book, Making Hate Pay: The Corruption of the Southern Poverty Law Center, the SPLC began as a noble civil rights group but has long since yielded to many forms of corruption. Last year, it fired its co-founder Morris Dees in a racial discrimination and sexual harassment scandal. That scandal led former employees to confess their complicity in the "con" of bilking donors by exaggerating hate. The SPLC promised an internal review last March, but it has yet to release any results. It faces also numerous defamation lawsuits for slandering law-abiding conservative and Christian groups.

The SPLC has become a far-left smear factory, an engine of political warfare. Indeed, the report released Wednesday frames its mission of "fighting hate" in political terms.

"It is time to move beyond the illusion that hate violence and extremism is merely a criminal crisis in America. It is also a political crisis. It has to be engaged politically," the report states. Indeed, the SPLC mentions Trump's name no less than 66 times and features images of the president, his Twitter profile, and his staff.

"As the country continues to experience white nationalist terror, extremist ideas long believed outside of the realm of legitimate politics are penetrating deeply into the mainstream, spawning public policies that target immigrants, LGBTQ people and Muslims. The Trump administration has installed members of hate groups into government—particularly those with anti-immigrant, anti-Muslim or anti-LGBTQ animus—and put in place highly punitive policies that seemed unthinkable just a few short years ago," the report warns. "These political moves will far outlast this administration, as Trump and his allies in the U.S. Senate have pushed through hundreds of new federal judges, many of whom are hostile to civil rights concerns and will serve for decades."

So what are these "hate groups" Trump has embraced? Conservative and Christian organizations, many with impressive pedigrees.

Alliance Defending Freedom (ADF), for example, has played a role in 56 Supreme Court victories (10 in the last decade). Trump has nominated judges with ties to ADF because it is one of the premier law firms in the country. Yet the SPLC insists on accusing it of being a "hate group" comparable to the Ku Klux Klan because it advocates for traditional Christian values and religious freedom against the increasingly radical LGBT activist wing.

The Family Research Council (FRC) is a leading conservative Christian think tank and advocacy group. Its president, Tony Perkins, is the current chairman of the U.S. Commission for International Religious Freedom. Yet the SPLC has accused FRC of being a "hate group," and one deranged man tried to kill everyone in the building and smear a Chick-fil-A chicken sandwich in their faces because of that accusation. This terrorist attack was foiled but FRC remains on the list. The SPLC report shows a picture of Trump with Perkins at an FRC conference.

Both of these "anti-LGBTQ hate groups" uphold the dignity of all people, regardless of sexual orientation, but they advocate policies the SPLC vehemently disagrees with. The report characterizes Trump's policies championing biological sex over transgender identity and upholding religious liberty as attacks on the LGBT community.

The SPLC also attacked Trump for tapping Charles Kupperman, a top aide to John Bolton, to become his acting national security advisor, noting that Kupperman previously served on the board of the Center for Security Policy (CSP). The report slams SCP as an "anti-Muslim hate group," but its president, Fred Fleitz, has insisted that "Muslim-Americans are an important part of our society, of the fabric of our society. They are doctors and lawyers, friends and neighbors. I don’t want to see anyone discriminated against based on race, or religion or gender." CSP, like many the SPLC accuses of being "anti-Muslim," merely warns against the ideology behind radical Islamist terror.

Sen. Tom Cotton (R-Ark.) has asked the IRS to re-examine the SPLC's tax-exempt status due to its partisan political attacks. The SPLC launched a 501(c)4 branch, the SPLC Action Fund, but this report was published by the ostensibly non-political 501(c)3 nonprofit.

Just one of a legion of once proud organizations that degenerate into nothing more than money and power hungry machines.

SPLC lost all semblance of respect years ago.
Reactions: iasooner1 and HighStickHarry
You must log in or register to reply here.

Report: Biden Snapping and Losing It in Profanity-Laced Tirades at Staff

Donald Trump Should Not be the 2024 Republican Candidate

A popular prayer books contains a shocking plea to God

Dim Dems Dance with the Demons